Never doubt that a small group of thoughtful, committed people can change the world. Indeed, it is the only thing that ever has.

There are several events that typically line every few months, outside of regularly scheduled operations, which help to add engagement for our members.

Children are the stepping stone to a great nation and world and as such, we ensure that there always exist programs that cater to their well-being.

Highlighting our commitment to our little ones and the community to which we serve, is our well-known, well-respected basic school.

St. Elizabeth Parish was one of the first missions assigned to the Passionists upon their arrival in Jamaica in 1955. It is located in an inner city setting. The neighbourhood has a high rate of crime and drug abuse.

Attached to the church is a basic school for the little ones in the neighbourhood. It offers a safe haven for the children as well as a good foundation for later education. Each day the students receive a nutritional lunch, and have recreational activities with their peer groups.

The faith community at St. “E’s” has had a positive influence on the local neighbourhood. People feel safer so long as St. E’s is there. Pastors and Parish members have worked hard to reduce the crime rate and make the area safer.

St. Elizabeth became a Formation House in the 70’s and 80’s while candidates attended the University of the West Indies and St. Michael’s Seminary. It also became famous for its dynamic liturgies on Sundays. It was a favourite site for Jamaican Spiritual Crusades.

Michael Rowe, C.P. was one of the Vocation Candidate that made their Pre-Novitiate experience at St. Elizabeth.

“A gift is not a gift until given.”

A former US Marine, Fr. Richard Award came to Jamaica in 1985, where he was a missionary for 18 years. He spent some of that time as Pastor of  St. Paul of the Cross Cathedral Parish in Mandeville. He was ordained in 1990.

He now resides and serves in Kingston at St. Elizabeth Catholic Church,

He knows most of the roads in Jamaica. In fact he is used to traveling regularly to Our Lady of Hope Parish, Williamsfield, to give special attention to young children in its Basic School.

Presently he still continues to visit the Mustard Seed Home, in Spanish Town.

“I’ve always wanted to help kids.” He says. I want kids to get a good start, with good teachers and a lunch to keep them going.”

He not only helps kids – “I like helping people,” he says. Some people are desperate here. So I give them something to get by, for another week, for another month.” 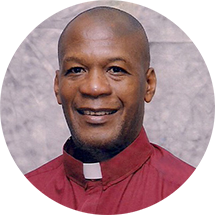